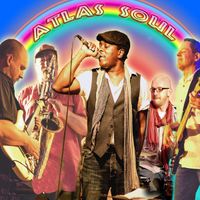 All ages concert (so you can bring your kids!)

Looking forward to have a great party time with long time fans/followers/friends celebrating a milestone date!

It's a party! Mark your calendar and bring your dancing shoes!

We are so psyched and looking forward to be back at the Regattabar!

We will bring new tunes and we will be featuring special guest Jon Simmons on trombone!

Assume The Position! (please click CC to turn on the caption  to view the lyrics )

All tickets $10. Special option $25 ticket includes a copy of "The Resistance Issue" of Pangyrus Literary Magazine, featuring many of the writers performing in the series.

It's the midterm edition of Resistance Mic at OBERON, with an amazing lineup: spoken-word poet Regie Gibson, memoirist Sarah Sweeney, poet Jennifer Jean, and activist Timothy Patrick McCarthy, with music by Afro-Mediterranean funk and jazz combo Atlas Soul. Then comes the launch of "The Resistance Issue," with readings by Grace Talusan, Sonya Larson, Fred Marchant, Anne Champion, and more! Featuring Resistance cocktails, including the Moscow Mueller, and a "send-a-haiku-to-the-White-House" contest.  ARTISTS PERFORMING TRUTH TO POWER The 2016 election inspired a broad-based Resistance not seen in the United States in decades. People from all walks of life have been protesting, marching, mobilizing, and organizing in an effort to take back the country and create a more compassionate and just world. Artists are vital to this work. This fall, the American Repertory Theater, in collaboration with the literary magazine Pangyrus, welcomes the second season of Resistance Mic!, a series of intimate, curated evenings where a diverse collective of artists will take the stage to perform truth to power in these troubled times. Launched on November 9, 2017—the one-year anniversary of the day after the 2016 election—Resistance Mic! is part of the A.R.T. of Human Rights series, an ongoing collaboration between the American Repertory Theater and Harvard Kennedy School’s Carr Center for Human Rights Policy, Hosted by Timothy Patrick McCarthy. During 2018/19, Resistance Mic! will take place on Tuesdays (September 25, November 13, February 19, and April 16) at 8PM with a 7:30PM door time at OBERON, A.R.T.’s second stage.

We are very proud to be invited again to play for that wonderful benefit for cancer research at the Mass. General Hospital.

This is a family event on a Sunday afternoon and it's your chance to come with your kids to listen, dance and introduce them to Atlas Soul!

So please do come, bring your friends and spread the word, this is for a real good cause!

From the bottom of our heart the Atlas Soul's tribe say: THANK-YOU!

Library After Dark with ATLAS SOUL

Saturday, September 15 from 7-9 pm.
Groove to the Afro-Mediterranean beats of Atlas Soul! Dance and enjoy the rhythm and melodies of this award-winning band, featuring Lexington's own Regie Gibson, Jacques Pardo, Zeke Martin, Fernando Huergo, Perry Bakalos and Matt Steinberg. Unwind and relax with old and new friends, with light snacks and cash bar available. Tickets are $10.

Atlas Soul has played scores of major venues such as The Montreal Jazz Festival, The Kennedy Center, The Festival International de Louisiane, the Boston Globe Jazz Festival, and more.

This "Library After Dark" event is brought to you by the Cary Memorial Library Foundation, in partnership with the Association of Black Citizens of Lexington and the Munroe Center for the Arts.

A very special concert at The Regattabar

We are super psyched to have Burcu Gulec (prononced Burju) an amazing vocalist back with us for this show and for the first time  Alexei Tsiganov a world class touring pianist (we have been trying to do a show together for the past 2 years!) that is leaving his mark on the Boston scene.

We are looking forwards to see you at our favorite jazz club in Boston (Cambridge).

Global Funk at the Regattabar

Greetings and Best wishes from all of us here at the Atlas Soul tribe!

We wish you the best time for this holiday season and happiness and health for this coming 2018 new year!

We want to let you know that we are very excited about our first show of the year at the legendary Regattabar Jazz Club at the Charles Hotel, Friday January 19th at 7:30 PM. We do hope to see you there to share our music and the fun with us!

We are very exited to be a part of this great fundraising event!

Welcome to our new series, Small World - Big Ears!  As technology continues to advance and make our world seemingly smaller and smaller, there are also many ways in which we seem to be drawn futher apart and more isolated from one another than ever before. The idea behind Passim's new monthly music series "Small World - Big Ears" is to bring together musicians who play in a wide variety of musical traditions from around the globe to share their music and culture with the Passim community. We hope that as we are able to broaden our abilities to listen, we'll find common ground within the language we all speak, the langauge of the heart: music.  We hope you will come out and be part of these shows on the last Monday of each month in a great listening room.

We are psyched and very much looking forward to this show at the legendary Regattabar Jazz Club!

An evening of brief talks by area organizations working for justice and equality followed by a great meal and an inspiring, vibrant concert. Come to any or all!  4:30~5:30 Pathway to Justice  5:30~6:30 Potluck Dinner  6:30~8:00 Atlas Soul: World Music For World Peace

We are very psyched and honored to perform at Cary Hall in Lexington for over 800 students from the Boston area schools that are learning French.

This event is sponsored by the French Consulate of Boston and is a private event.

Street parking allowed after 6 PM in the downtown area

Global Funk anyone? it's Saturday night..

Saturday September 24th at 7:30 PM, Atlas Soul is back at the Regattabar Jazz Club at the Charles Hotel in Harvard Square.

We are very psyched about this show and we hope to see you there! Please keep reading bellow..

Have you ever wanted a special ring tone for your phone? Click Here for a free download of one of the new song (theme) that we will play for you! It does not have a definitive name yet but I would call it " African & bluesy" What do you think? Let me know if you enjoy it every time that your phone rings! :)

'We're Atlas Soul' is possessed of an inner life that breathes forth from every note and frame - Atlas Soul's exuberant world beat creation is a thrill to view and a thrilling addition to its genre.' The Akademia Music Awards

Thank-you! You made it happen..